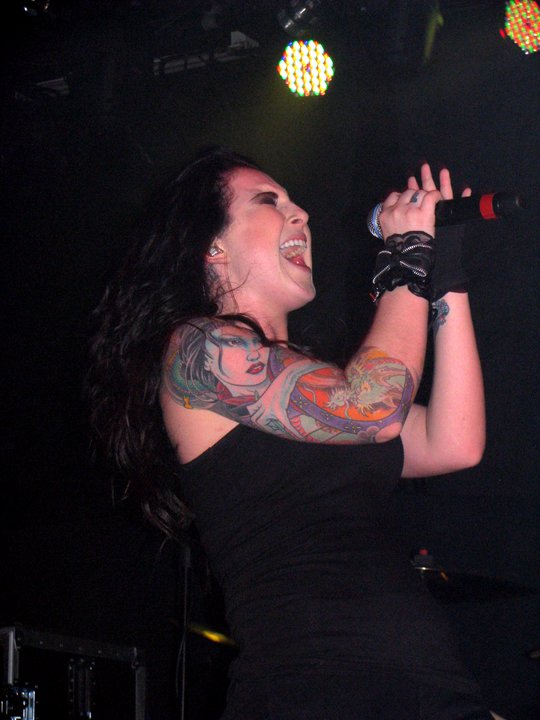 Out of the four shows I had planned to attend in the month of April, I was most excited for the HIM concert at the Commodore Ballroom to see one of their openers, alternative rock band We Are The Fallen. You might know their lead singer: she goes by the name of Carly Smithson, and her claim to fame was being the one of the finalists on Season 7 of American Idol.

The first two openers proved to be largely entertaining. The guys from Drive A had such a wild energy to their group unlike anything I had ever witnessed before, and Dommin, who had this gothic romantic vibe to their artistic vision which I really liked, did a fantastic cover of Cutting Crew’s “(I Just) Died In Your Arms Tonight”.

Two hours later, We Are The Fallen FINALLY arrived on stage. Holy smokes! I am always blown away by the sheer power of Carly’s very distinct voice. That woman is a dynamic force to be reckoned with! She was on fire with the way she was belting it out with passion and working the stage like a pro. Carly was accompanied by the incredible band consisting of Ben Moody, John LeCompt, Rocky Gray and Marty O’Brien, four extremely talented musicians. They performed songs from their unreleased debut album, including the single “Bury Me Alive,” “Without You,” and two new favourites of mine, “St. John” and “I Am Only One”. It was so wonderful to see Carly back on tour, singing material that she created and feels very proud of. She is one of the most determined and hard-working artists that I’ve ever come across, and I am so happy that she has become involved with a team of musicians who share the same vision and purpose as her – making meaningful music that ignites their listeners.

After We Are The Fallen had finished their set, my friend and I escaped from the crowd and headed over to the merchandise booth, where the band was signing autographs. I think that it’s really awesome of them to come out every night to meet and greet the fans – it really shows how much they appreciate all of the support they’ve received. Carly was all smiles and such a sweetheart. Ben, John, Marty and Rocky were very friendly as well, making sure to personally thank everyone for coming out to see their set. All five members of the group are spectacular individuals, and they deserve all the success in the world!

For more of my photos from the concert, see my Facebook Album.

We Are The Fallen’s debut album “Tear The World Down” arrives in retail stores and digital music distributors everywhere on May 11th.

I am a Gryffindor, an old soul who’s young at heart, a human jukebox, and a corgi lady in training.