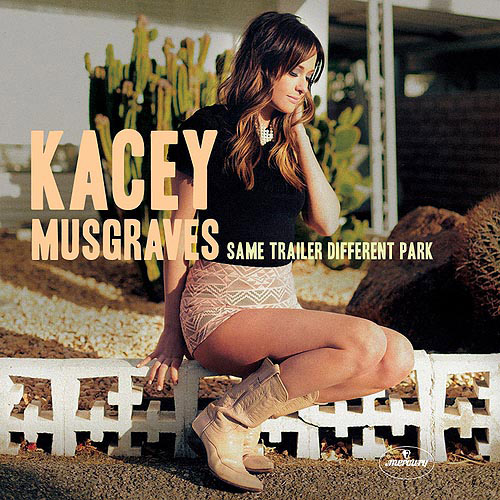 Kacey Musgraves has been generating a ton of buzz in the world of country music with her debut album, Same Trailer, Different Park.

I decided to start listening to Kacey upon a glowing recommendation from her good friend, Kree Harrison (from this current season of American Idol) and I’m sure glad that I did, because her entire album is a songwriter’s treasure box! Her lyrics are refreshingly honest and extremely witty – she has a knack for infusing clever word play and rhymes into her verses and choruses.

As an artist, Kacey does not shy away from telling it like it is; she acknowledges the troubles of everyday people and tackles many taboo topics upfront in her songs. “Merry Go ‘Round” confronts the trap of abiding by what’s traditionally expected of you and ultimately succumbing to the emptiness that comes with settling down (Mary, Mary, quite contrary / We’re so bored until we’re buried / Just like dust, we settle in this town). Similarly, “Blowin’ Smoke” questions the vow we make to ourselves to quit whatever is holding us back (like that dead-end job we detest) when the time is right by asking when that time will arrive (We all say that we’ll quit someday / When our ship comes in / We’ll just sail away / But we’re just blowin’ smoke).

My favourite song, “Follow Your Arrow” (which reminds me of Kelly Clarkson’s “You Can’t Win“) is the most controversial and poignant track for the nonchalant manner in which Kacey encourages open-mindedness. Her message is strong and clear: No matter what you do, people will always criticize you, so we might as well forget about pleasing others and follow our arrow wherever it points, by doing what we want and being who we are (Say what you feel / Love who you love / ‘Cause you just get / So many trips ’round the sun).

People feeling a little lost, dejected, and stuck in a rut will find identification with the characters depicted in these songs and solace in the sharp realism of the subjects she covers. However, Same Trailer Different Park isn’t all just doom and gloom. “Silver Lining” offers a tinge of hope with the sentiment that in order to get the rewards in life, you must take the risks (If you’re ever gonna find a silver lining / It’s gotta be a cloudy day). I sure feel lucky to have discovered an album as truthful and relatable as this one!