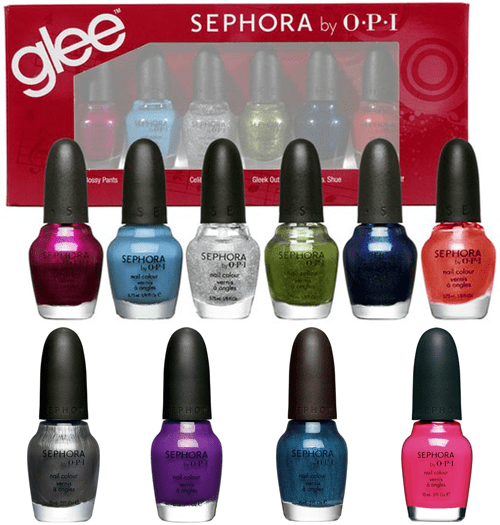 Riding high on the successful launches of Katy Perry and Justin Bieber’s branded lines, OPI has added a new pitch-perfect phenomena to its roster of star-studded nail polish partnerships. That’s right, Twentieth Century Fox and Sephora have teamed up to develop an exclusive, limited-edition collection of nail products inspired by the hit comedy-musical television show, GLEE, available February 3rd at all major Sephora locations in the U.S. and Canada.

The limited-edition Sephora by OPI GLEE Collection Nail Colours will include individual full sized polishes and a six-piece mini-set featuring three exclusive shades. The Sephora by OPI GLEE Collection Chic Prints for Nails Design Appliques will be available in three GLEE-inspired designs. The launch will coincide with the highly-anticipated Superbowl episode of GLEE, airing on February 6th on FOX.

As a nail varnish junkie and self-processed Gleek myself, I am definitely singing my praises over this glamorous collaboration! It’s like the duet of my dreams, a la Barbra Streisand and Judy Garland’s Get Happy/Happy Days Are Here Again (also paid tribute to on Glee by divas-in-training Rachel Berry (Lea Michele) and Kurt Hummel (Chris Colfer). These vibrant shades look very promising (“Slushied” and “Gleek Out” in particular) but of course, I’ll need to see the actual swatches in order to judge which colourful contestants have made enough of a statement to advance to this season’s beautified Sectionals (to be held on my make-up counter).