On August 25th, Demi Lovato and Nick Jonas brought their Future Now Tour to Rogers Arena in Vancouver. This package deal of a concert starring the two young pop singers’ promised to be a treat for joint fans of the dynamic duo, reviving nostalgia from their Camp Rock origins and showcasing their developed artistry in the present day.

On TUNESDAY, I share some of the songs, music videos, and live performances I’ve been groovin’ to. Here are some of my top favourites from October…

END_OF_DOCUMENT_TOKEN_TO_BE_REPLACED

TUNESDAY is a new regular feature on my blog where I share some of the songs, collaborations, music videos, and live performances I’ve been groovin’ to. Let’s start the showcase off with a new release from the summer’s most buzzworthy UK-based singer-songwriter-folkster…

END_OF_DOCUMENT_TOKEN_TO_BE_REPLACED 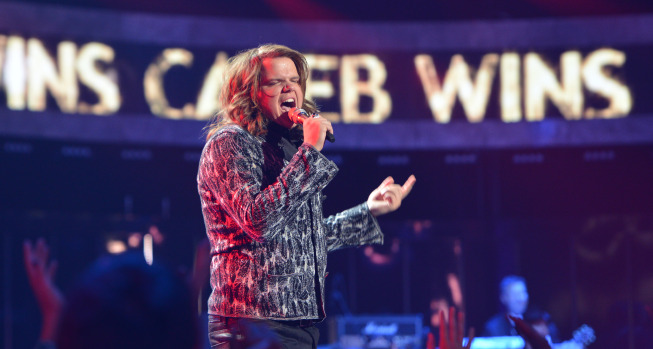 Congratulations to Caleb Johnson, the winner of American Idol Season 13!

The big-voiced, retro rocker from Asheville, North Carolina, who successfully channeled his classic rock/southern bluesy-rock sound into stand-out performances each week, was named the champion of the 2014 edition of the long-running singing competition. As first proven by Season 12’s Candice Glover, another returnee contestant turned winner, Caleb proves that the third time really is the charm! Jena Irene, the spirited and talented teen from Farmington Hills, Michigan, is this year’s runner-up. From wild card to blossoming pop-rock musician, she fought a fierce fight and came a long way with her gutsy artistry and steady growth.

Caleb and Jena kicked off the grand finale celebrations with a BANG – their sensational duet medley of “We Will Rock You”, “I’m Just a Girl”, and “It’s Only Love” raised the bar sky high for the night’s performances. The Top 2 also got the chance to sing with their own favourite bands, with Caleb and KISS on “Love Gun” and “Shout It Out Loud” and Jena and Paramore on “Decode” and “Ain’t It Fun”.

The Top 10 finalists were also treated to special duets, trios, and group performances with some of the industry’s top stars, including: Alex Preston with singer/songwriter Jason Mraz on the new single, “Love Someone“, Jessica Meuse with country singer Jennifer Nettles on “Wrecking Ball“, Sam Woolf with fellow Idol Phillip Phillips on “Home” and “Raging Fire”, Alabama boys CJ Harris and Dexter Roberts with Darius Rucker on “Alright“, and Malaya Watson with soul singer John Legend on his beautiful ballad, “All of Me“. As well, the Idol Guys teamed up with Aloe Blacc to sing “The Man” while the Idol Girls girl-powered it up with Demi Lovato for “Neon Lights“.

The judges (Jennifer Lopez, Keith Urban, and Harry Connick Jr.) and Randy Jackson joined forces for a once-in-a-lifetime collaboration to pay tribute to two classics – “True Colors” and “Go Your Own Way”. Even host Ryan Seacrest got in on the performance action with his primetime television singing debut – a duet of “Right Here Waiting” with Richard Marx.

Caleb’s winning moment was met with genuine shock and gratitude from the singer, who ended his victory night with an encore of his debut single, “As Long As You Love Me” while bombarded with hugs and congratulations from his finalist friends, his family members, and the judges.

And with that, it was another end to another great American Idol season. Until next January, when we will do this all over again!

On February 9th, Demi Lovato kicked off her Neon Lights Tour at Rogers Arena in Vancouver. This is the pop star’s first major stadium-sized headlining tour. To make this occasion even more special, she recruited two rising girl groups from her X Factor family, Little Mix and Fifth Harmony, to join this girl power party as her opening acts.