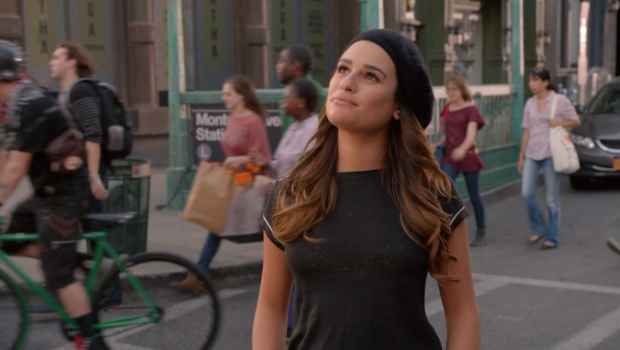 It seems like it was only just yesterday when the New Directions alums banded together to bring glee to New York City. In Glee‘s Season 5 finale, “The Untitled Rachel Berry Project”, we find the rising stars going their separate ways once again as their dreams take them to places they never imagined.

As part of the television development deal Rachel (Lea Michele) has received, television writer Mary Halloran (guest star Kristen Schaal) is sent to New York to observe Rachel and turn her story into a script. However, the quirky screenwriter has some far-out ideas of her own (with an overabundance of #hashtags and coffee raves) that fail to portray the leading lady accurately. Rachel attempts to convey her true essence to Mary by singing a soaring rendition of P!nk’s “Glitter in the Air“. She ends up with a script that represents her life AND gets immediately greenlighted for a pilot… in Los Angeles!

Mercedes (Amber Riley) and Sam (Chord Overstreet) are at a crossroads, dealing with relationship issues of trust and commitment as their careers begin to rev up. Mercedes is set to embark on a mall tour in promotion of her album, and she kicks the festivities off with a rousing performance of an original song, “Shakin’ My Head” with Brittany (Heather Morris) as one of her back-up dancers. Also mentioned is Santana (Naya Rivera, who was glaringly absent from tonight’s episode – alleged behind-the-scenes drama aside, her character should have been present to close out the season), who will be joining the girls on tour in Reno, Charlie’s Angels style. Meanwhile, Sam finds himself auditioning for a big modelling campaign with Treasure Trailz, and performs the Duran Duran classic “Girls On Film” during his test shoot, where he is surrounded by beautiful women and temptation in the form of photographer Charlie Darling (Beau Garrett). Mercedes and Sam come to terms with the fact that they are heading off on different paths and separate, with the knowledge that they are meant to be together… someday. So, Mercedes and Brittany go on the road, and Sam, after achieving his ultimate dream of being on a bus billboard, moves back home to Lima.

Blaine (Darren Criss) has his big showcase with socialite June Dolloway (special guest star Shirley MacLaine) on the horizon, but he is so racked with guilt after having led Kurt (Chris Colfer) on to believe he’d be performing, even though June has refused to show any interest in supporting his fiance’s equally grand talents. Torn between his longing for stardom and the love of his life, he conveys his feelings with an intimate performance of John Legend’s emotional piano ballad, “All Of Me“. Blaine goes ahead with the showcase, performing a timeless and classy duet of  “No Time At All” with June, but decides to merge his talent with his passion by closing out the evening with a surprise performance of “American Boy” with Kurt, which proves to be lively and fun enough to win June’s approval. The episode ends with the happy and supportive couple finally living together in the loft.

The NYC gang (with Rachel, Kurt, Blaine, Mercedes, Sam, Artie, and Brittany) closes the show with an epic street party, bursting out into song and dance to Bastille’s big hit, “Pompeii“, before dispersing into their own new directions.

I have mixed feelings over this finale. I am bummed to see the gang – aside from Kurt, Blaine, and Artie (Kevin McHale), who remain for school – split away from New York so soon. I liked the vibe and dynamic of this group of friends as they navigated through the big city together. Also, I feel that the characters are achieving their goals at a much too rapid speed. Glee began as a show about the underdogs. As difficult as it was to standout in high school, it’s even more challenging in the real world. I want to see them as struggling artists, but good things are coming to them so quickly and easily. At the same time, it’s been an immensely difficult year for these kids, with the death of Finn Hudson, the disbanding of the Glee Club, and now, the end of the NYC era, so I do like seeing them happy and moving forward with their lives. As the very song “Pompeii” says, I’m gonna try to be an optimist about what’s to come for the Glee gang in Season 6!